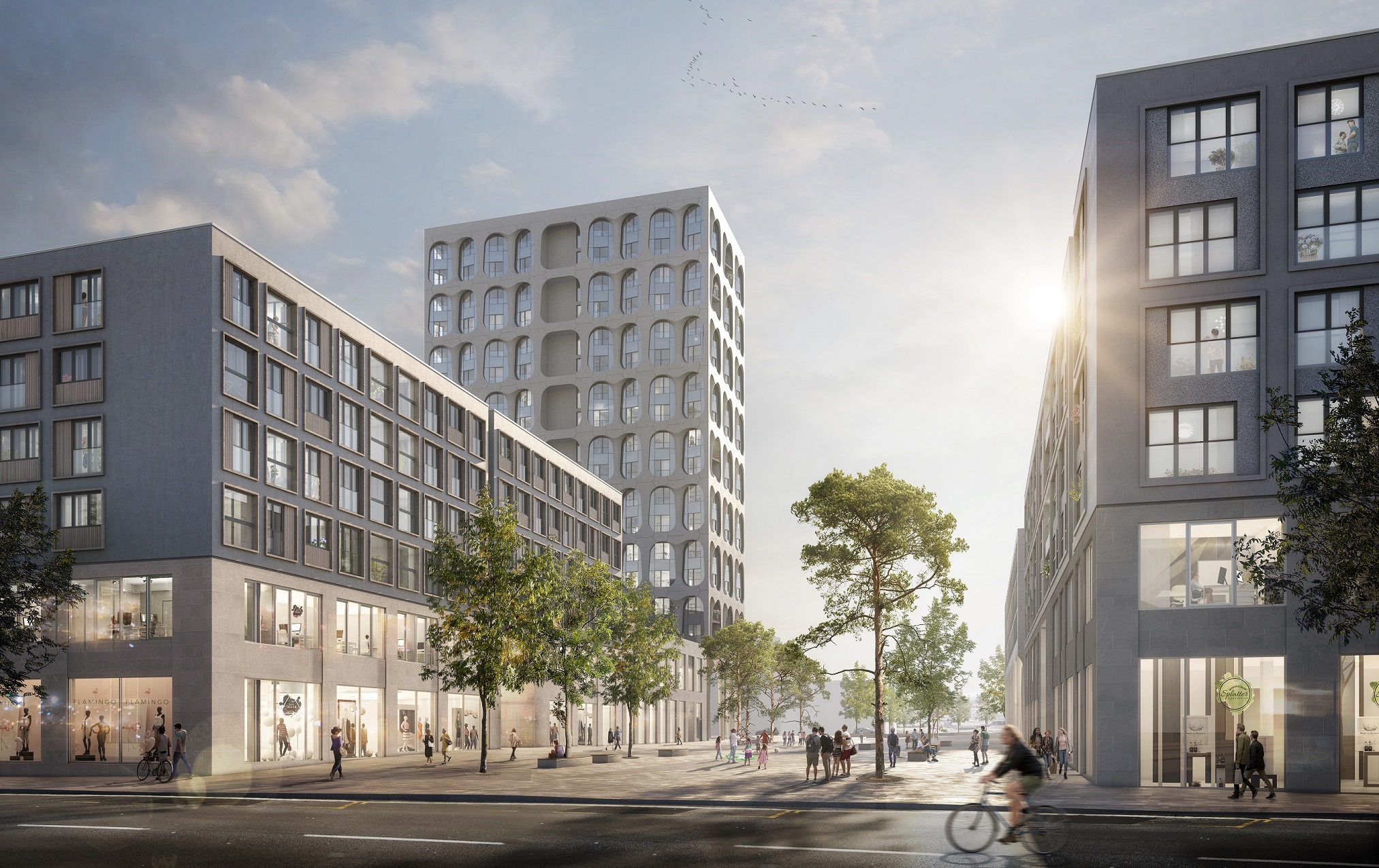 Munich, August 22, 2022. Isaria München Projektentwicklungs GmbH, a subsidiary of QUARTERBACK Immobilien AG, is developing the new ZAM district center in the Freiham district of Munich. Around this central square, around 35,000 people will one day live in the neighborhood. After construction work started last year and the laying of the foundation stone was celebrated in July 2022, Isaria has now gained another renowned tenant in the form of ALDI SÜD.

The new district center will be characterized by a diverse mix of uses. ALDI SÜD has secured an area of almost 1,800 m² on the first floor of the MK 2.2 section. The lease agreement runs for 15 years. “ZAM offers us excellent prospects,” says Justus Rehn, who heads ALDI SÜD’s Munich project development office. “We can secure local supply here and make a sustainable contribution to revitalizing the location with our high customer frequency.”

“We are delighted to have gained a strong partner in ALDI SÜD, which will commit itself to the location permanently and establish ZAM as a vibrant center,” says David Christmann, spokesman for the Isaria management. “Previously, we were already able to bind well-known tenants with the organic grocer tegut as well as the Stadtsparkasse München.”

Quartier ZAM is being built on four construction fields with a total area of around 100,000 m². On the two construction fields, which Isaria is developing for the Deutsche Wohnen Group, over 300 rental apartments, including a residential tower over 60 meters high, approx. 5,400 m² of office and practice space, as well as approx. 6,000 m² of retail and restaurant space are to be built. With ALDI SÜD as a further tenant, more than half of the retail space has already been let.

In order to provide a varied offering for future residents, Quartier ZAM is focusing primarily on shopping, services and gastronomy on the first floor. The second floors will be used for medical practices, offices and other commercial facilities. The apartments and the open spaces close to the apartments will be located above.
The completion of the quarter is scheduled for mid-2024; the opening of the new ALDI SÜD store for fall 2024.

The transaction with ALDI SÜD was brokered by IPH, which is exclusively mandated for all retail leasing at ZAM.

About Isaria München Projektentwicklungs GmbH
Isaria specializes in the development of sustainable buildings and urban quarters in urban areas. From acquisition to the construction phase, all projects undergo sustainability analyses as standard. The aim is always to develop livable urban neighborhoods that conserve resources as much as possible, for example on the site of the MD paper mill in Dachau, where up to 1,000 apartments are to be built in the coming years. Isaria is a company of QUARTERBACK Immobilien AG.

About ALDI SÜD
The ALDI SÜD Group is represented in Germany by independent regional companies throughout western and southern Germany. These are responsible for around 50 to 100 stores in a clearly defined geographical area. In Germany, around 49,600 employees work to make things easy for customers: ALDI SÜD offers everything for everyday needs, and the product range includes more than 500 organic items throughout the year, as well as numerous foods and regional specialties from local producers.

About QUARTERBACK Immobilien AG
QUARTERBACK Immobilien AG can point to 29 years of expertise in the development and construction of residential and commercial properties. The Leipzig-based company operates with more than 320 employees in central Germany as well as nationwide in almost all major real estate locations, combining project development and asset management under one roof. With a realization volume of around eight billion euros, QUARTERBACK is one of the largest project developers in Germany.